Koshinohana Shuzo is a small brewery in the Niigata plains. This agricultural region, very snowy and cold in the winter, is one of the most iconic terroir for the production of sake. Founded at the end of the 19th century, koshinohana sake brewery has managed to keep their traditions together with being innovative with very original sakes such as Kawasemi that compliments the multiple award-winning Daiginjos from the brewery.

A daiginjo sake with a fragrant aroma and gentle, blooming note. A true delicacy.

Organic farming is a method that brings out the original cultivation power of the rice field, without using pesticides and chemical fertilizers. Their product “ORGANIC CHIKURIN ” is made from this organic rice.

In 2009, they have received organic certification from the National Organic Program (NOP) in North America, and in 2010, they became the first Japanese sake brewer to be certified by organic standard in Europe (EC Regulation).

The mellow aroma is reminiscent of fragrant trees.Despite the allover dryness, one could faintly trace a dark and smooth sweetness and a satisfying taste of brown, unmilled rice. The more sips that are taken, the more umami is recognised and savored. 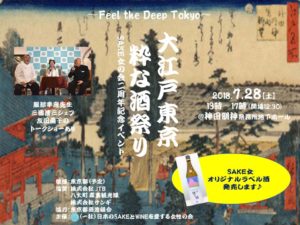 HOTEL DE MIKUNI, Mikuni chef will make French appetizers from Tokyo local ingredients. There will be many pop-up shops such as cheese, Japanese sweets and rice cracker.

In 1832, when the head of the Uesugi clan first visited the Shonai area he was so amazed by the quality of the water that he recommended sake production to first generation Heishiro.

And so, in 1854, Heishiro began making sake. In the following year 1855, the visiting Daimyo of the Sounai Clan, Sakai Tadakatsu was presented with the sake and in return christened the brand “TATENOKAWA” (English Name: CASTLE BROOK).

In 2005 they began establishing contracts directly with local farmers. The raw ingredients of Junmai Daiginjo are rice and water. The rice plays a huge part in determining the quality of the end product and yet so many breweries rely on rice suppliers and brewer’s associations for procurement.

In 2010, here at TATENOKAWA, Inc. they began Junmai Daiginjo only production under a new “TATENOKAWA” 100 year vision

In order to realise this vision they have increased the tempo of their overseas exports, which they began in 2008, with a view to their sake becoming a luxury item that has fans all over the world.

Their goal is to make sake that appeals to and is recognised by people globally.

A part of the Ryu (stream) series, is named after its high quality and high specifications. Made with 40% polished Yamada Nishiki sake rice and only the best part of the sake pressing nakadori (middle cut). A sake with a stable balance of flavour and aroma, a nose of ripened fruits, and a high quality Japanese candy like elegance, topped off with a clean finish.

Ichinokura, a leading sake brewery in Japan, was founded in 1973 with the aspiration of leading the industry into the 21st century and promoting a sophisticated and vibrant sake drinking culture, through brewing high quality sake in Miyagi Prefecture. Four local sake breweries merged into one with a common goal in mind and strived to achieve this while assisting business and agriculture in Matsuyama, Osaki city.

They aim to establish a good relationship between their customers and Ichinokura employees, and develop the relationship between local communities and Ichinokura itself, by promoting a safe and prosperous style of living based on the fermentation technologies that they have acquired over time in harmonizing with people, nature and Japanese tradition.

Ichinokura headquarters and sake factories are located in the woody hill of Matsuyama, Osaki city, Miyagi prefecture, which is 243 miles (392 km) north of Tokyo. Their products have been enjoyed not only in Japan but also exported to more than 20 countries including the U.S.A. and throughout Asia. Ichinokura, maintaining the very spirit of its foundation, is putting tireless efforts into making the very best quality sake, which people will enjoy globally.

Ichinokura is fortunate to the three essential elements required to make the highest quality Japanese sake: water, rice, and expertise.

Gives a rich aroma. Once you sip it, fabulously interesting taste spreads in your mouth. A masterpiece of selected quality ingredients, traditional manual brewing and its techniques.