Kankiku brewery is in Sanmu city, blessed with rich nature and temperate climate in Chiba prefecture. The city is bordered by the Pacific Ocean to the east. From Tokyo station it takes about one hour by limited express JR Shiosai. It is good distance for you to escape the noise of the city.

In this town, there is beautiful sea. People often come here to surf. In the summer time there are a lot of people want go to sea. There is a bus service that runs time to time from the JR Naruto station to the beach during the months of July and August. These buses run free of charge as long as you are only going to the beach (the first stop).

In this are there are lots of sweet and delicious strawberry farms. In early spring, many people visit to pick strawberries at the farms. Reservation are not required but recommended. You can eat as many strawberries as you want while picking and you pay by the time limit, usually two hours and about 1000yen.

Kankiku brewery is founded in 1884. In the site of the brewery, there is a over 200 year-old persimmon tree. They brew sake with spring water from the root of the tree. It contains high minerals and hard water. It makes powerful fermentation and sake becomes tasteful flavor.

Suisen Shuzo, a historic sake brewery was preparing to ship its 2010 stock. Without warning, the Great East Japan Earthquake began rumbling off the scenic Iwate coastline. Shortly thereafter, brewery owner sent his employees home for the day to check on and be with their families. Twenty minutes later, a tsunami tore through the city of Rikuzentakata, obliterating the award-winning brewery (nestled two kilometers from the coastline) and tragically taking the lives of seven Suisen employees. The entire town’s foundations were scattered across several kilometers of Japanese countryside.

The process of rebuilding Suisen was not easy. In order for them to quickly get back on their feet, a rival brewery, Iwate Meijo, extended their hand and offered Suisen use of their facility to brew their sake. Meanwhile, construction began on a new brewery, about fifteen kilometers up the coast from Rikuzentakata in the town of Ofunato. In August of 2012, less than eighteen months after the disaster, the new Suisen Shuzo opened.

You can taste over 50 kinds of Kimitsu Jizake.

Kimitsu city is located along the western coast of the Boso Peninsula in Chiba. The Kameiwa cave is in Kimitsu. It became suddenly popular spot by Instagram. The beauty of the waterfall looks like a fairy tale. If you have a time, stay overnight and try to go there to shoot photogenic moment in early morning. The morning light reflecting off the water is a great photo opportunity and memory. 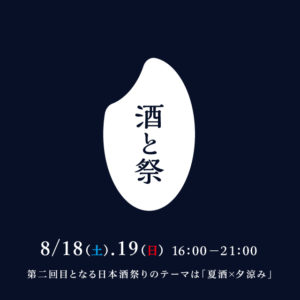 You can enjoy a collection of Summer sake from various places of Japan. Moreover, you can taste foods only possible in summer and appetizers go great with Sake. It is the best way to forget the boiling heat of summer.

There are gifts for people who come the event in Yukata. (First come, first served in each day)

In the event there are more pop up Liquor shops will come, you can taste more than that!