Shimane is part of the Chugoku Region, along with four other prefectures (Tottori, Okayama, Hiroshima, and Yamaguchi).

Shimane can be considered to be the birthplace of sake for its long and important history, which dates back to the time of mythology. Myths and records remain to tell us the deep connections between Shimane and sake. For example, Saka Shrine in the Izumo region enshrines a deity of sake brewery. The annual gathering of all of the deities of Japan so that they may hold meetings in Izumo is a widely known part of the folklore. After the meetings, most of the deities went back to their enshrined places, but some deities found sake so delicious that they stayed there and enjoyed sake for another six months. The place where they stayed and drank sake is believed to be the origin of Saka Shrine. The shrine is one of the very rare shrines where is allowed to brewer sake. In October, one month ahead to the brewing season, an important ritual takes place at Saka Shrine and people related to sake brewery pay a visit hoping they can make good sake for the upcoming season.


Rihaku Shuzo was founded in 1882 in Matsue City in Shimane, although it was not until 1928 that we adopted the name Rihaku. Rihaku was a famous poet in China, and is also known in English as Li Po. He is as important in Chinese literary history as Shakespeare is to people in Britain. Rihaku lived from 701 to 762, and was heavy drinker. He was a kind, open-minded, wandering poet that was famous for drinking a lot before writing. He was known to have said, “I drink a bottle, and can write 100 poems.” They make use of Rihaku’s poems and phrases in their brochures and on their labels, and quote him often. Several of their sakes are named with phrases from the great poet’s words.

One of the most renowned sake brewery areas in Japan,”Nadagogo.” The Fukuju brewery is located in there. Founded in 1751.

Considered one of Japan’s best sake-brewing areas, this coastal cluster of towns located around 12 kilometers from Kobe City and Nishinomiya City includes Nishigo, Mikagego, and Uosakigo. It is said that breweries began producing sake around 1330.

You can take a walk through the heart of the brewing area down Sake Brewery Street, which is home to many independent museums that shed light on the sake production process. Fukuju brewery offers tours and samples of their wares.

The best sake rice and source water are brewed carefully. Because of the high quality sake from Nada was already famous during the shogun period. The water is rich in minerals and generates a clear and powerful sake profile. Therefore sake from Nada is called “Otoko-sake (men’s sake)”.

FUKUJU Chotokusen Daigin is awarded SAKE COMPETITION 2018 Ginjo GOLD. Fukuju Junmai Ginjo was served at the dinner and reception for the Japanese scientist who won the Nobel Prize in 2012. Since then it has become ultra popular in Japan and you cannot find it on the shelves anywhere.

Akita, Japan, with its natural resources and climate, was the perfect home for rice agriculture, where the family of Shigenari Kimura, a retainer of feudal lord Hideyori Toyotomi, founded Kimura Brewery in 1615. With the stabilization of rice agriculture during the peaceful Edo period and the prosperity of the local Innai Silver Mine, Kimura Brewery flourished, and many other breweries followed in our footsteps. The arrival of the Ou Main Line by the East Japan Railway in 1905 allowed us to ship our sake beyond our prefecture. For 400 years, we have grown with the changes to our local community and continue to engage in the unique sake brewing which is rooted in our region.

Made with the premium sake rice, Yamadanishiki, which is polished to 40%. Enjoy the rich aroma and elegant flavor at a leisurely pace while the airy sweetness fills your mouth. With a combination of subtlety and noble presence of the finest, this is a beautifully balanced sake. We recommend it as a gift for special occasions. Serving temperature: suzu-hie (59F range).

Established 1688. The brewery, Honda shoten is commited to rice their belief based on “Rice Sake has rice taste”. Great quality Daiginjo which made from Japanese No.1 quality rice “Yamadanishiki”

The sake brewing conditions in this area are beyond perfect – the grounds are covered in a fine morning mist, and the soil used to grow the rice is rich in calcium and montmorillonite, and Honda Shoten will only do business with farmers who grow as organically and naturally as possible. The rice is dried naturally, making for high-quality brewing.

Boasts a very light nose of honeysuckle and musk melon, a light to medium body and a gorgeous true depth of flavor, and a clean cut finish. 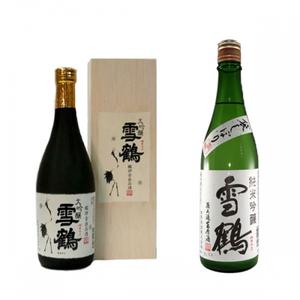 Established 1897. Tahara shuzo is located in the southwest of Niigata Prefecture.

That portion of the brewing water which is used in mashing (“mashing water”, shikomi-sui) has a significant influence on moromi fermentation and sake quality.

For “Yukitsuru”, they use natural springs in the foot of Kubikikomagatake.

There is a well in the brewer premises, once they have used the water, which is medium hard water. Although it is suitable for dry taste sake, it is unsuitable for making soft and gentle texture “Yukitsuru”.

They cannot access to the spring water area because road closures during winter, from mid December to early March. Therefore they storage the spring water in a 10,000L tank to keep “Yukitsuru” sake quality. 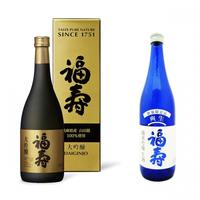 Founded 1751. The best sake rice and source water are brewed carefully. The brewery is located in the famous sake village Nada in Kobe in Hyogo prefecture. Because of the high quality sake from Nada was already famous during the shogun period. The water is rich in minerals and generates a clear and powerful sake profile. Therefore sake from Nada is called “Otoko-sake (men’s sake)”.

FUKUJU Chotokusen Daigin is awarded SAKE COMPETITION 2018 Ginjo GOLD. Fukuju Junmai Ginjo was served at the dinner and reception for the Japanese scientist who won the Nobel Prize in 2012. Since then it has become ultra popular in Japan and you cannot find it on the shelves anywhere.