Founded in 1887. The name “Taikan” is derived from “crown” (pronounced “kan” in Japanese) which was worn by a newly promoted military officer in the hopes of achieving success in his career. Connoting success and promotion, the sake named “Taikan” has been known as a celebratory drink that fulfills one’s dreams.

The exquisite balance of taste and nose. It is silky on your tongue. chilled sake

Best served, chilled between 10℃(50℉) and 5℃(41℉).
In Winter? It is good for cooling down your palate or as refreshment an accompaniment for bone-warming dishes.

Established in 1603. Tuskasabotan is one of a symbolic sake brands in Kochi. Sakamoto Ryoma is one of Japan’s favorite historical figures and was a central mover in efforts to overthrow the shogunate 150 years ago. It is said that he also enjoyed “Tsukasabotan”. Their sake is brewed with NIYODO River which is the miraculous clear stream Niyodo River boasts the highest water quality in all of Japan. The soft river water makes their sake taste good length even though Kochi sake is typically light and dry.

You can taste Tsukasabotan with traditional Japanese cuisine at Hotel Gajoen Tokyo 21st of September. ￥15,000

Bikun indicates beautiful fragrance in Japanese Kanji. Same as the name, this sake has elegant and delicate ginjo aroma (fruity aroma). It presents vibrant soft tastes that smoothly on the palate. This well-balanced flavor will be accepted by everyone. 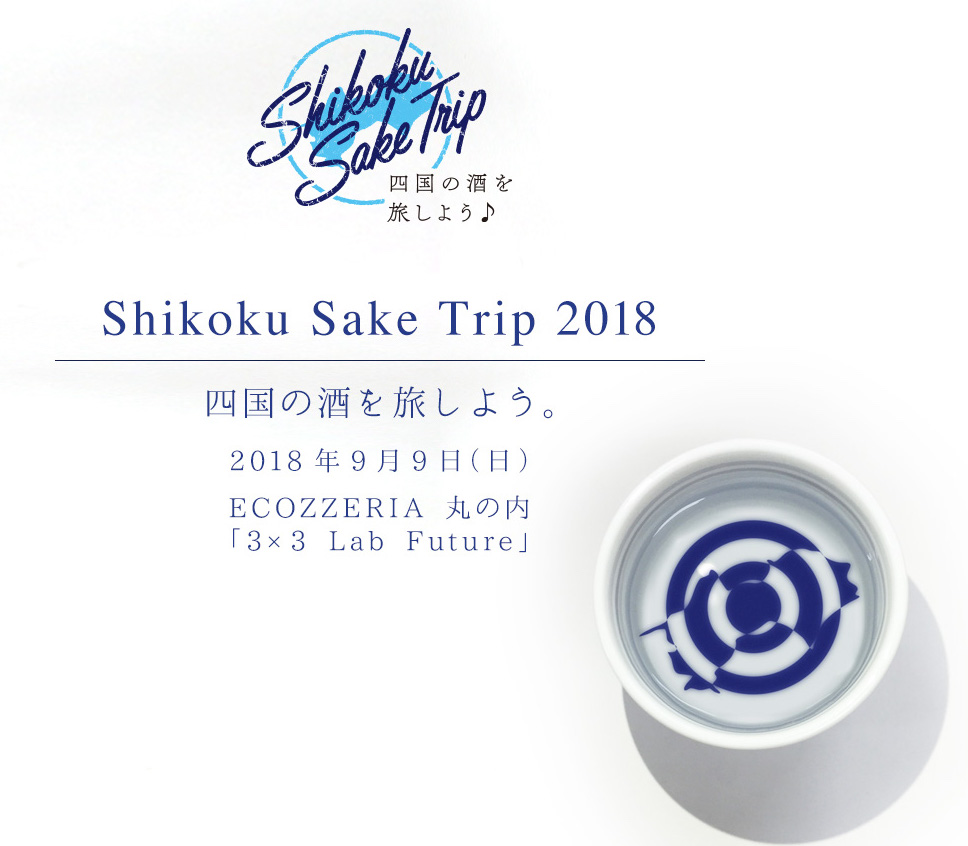 The event consists of three parts. Ticket valid for One Part only. Plese buy the ticket, you want to join.

This is good for who would like to enjoy sake more than meals! You can enjoy various Shikoku sake and snacks which representing selected Shikoku.

It is the workshop by the teacher from Tokyo Agricultural University. You can learn about sake and after that enjoy Shikoku food. The ingredients are of course from Shikoku directly and cook by Ginza Japanese restaurant chefs.

Tosa Province (土佐国 Tosa no kuni) is a former province of Japan in the area that is today Kochi Prefecture on Shikoku. Kochi has unique drinking games such as “Hashi Ken” and “Beku Hai”, which are not seen in other regions.

Hashi Ken (Chop sticks game)
This traditional drinking game is played by two people and involves guessing the number of chopsticks hidden in the sleeve of the opponent’s outstretched arm. The loser has to drink sake, making the game more heated as the players become drunker.

Beku Hai (cups that cannot be put down until the sake inside has been finished)
Players of Beku Hai, another traditional drinking game, spin a top and drink from the cup indicated on the upward facing side of the top when it falls. The bottoms of the cups are hard to balance, and one has a hole in it, so you cannot put them down until you finish the sake inside. Spinning Top Drinking Game.

Ticket valid for One Part only. Plese buy each part ticket, you want to join.

You can taste Tosatsuru, TOSATSURU SAKE BREWING CO.,LTD. from Kochi prefecture, and Koshi no Homare, Hara Shuzo from Niigata prefecture.

TOSATSURU SAKE BREWING is located near the Muroto Cape, the largest brewery in Kochi prefecture. A clear stream Yasuda Riversmall runs by near the brewery, the well water which is in the site of the brewery is hard and contains well-balanced mineral. In the Annual Japan Sake Awards, they have won total 45 times since 1965 and the highest number of Gold in Japan.

The highest point of the sake master’s art. Enjoy the full aroma & rich taste of Daiginjo to your hearts content. The sake is made with utmost care under the close attention of their sake master (Toji), and the rice grains are polished down to less than 40% of their original size, all to create this delightfully refined & involving sake.

This water contains less chemicals and germs than ocean surface water (because there is no sun light down there, bacteria cannot survive) resulting in a pure, clean-tasting sake with exceptional freshness.

Tosatsuru Azure has a fruity Ginjo fragrance of ripe pears, a refreshing and clean palate, and a lengthy dry finish with a fair amount of acidity.

At the time Hara Shuzo brewery was founded in the late Edo period (1814), Kashiwazaki was flourishing as a Shukuba (station town) on the Hokkoku Kaido expressway and also as a maritime town by the Sengoku ships. Because of this, the elegance and refinement of the city’s culture was infused into this place and the unique culture bloomed. With the nature’s blessings and the rich culture of the area, the taste of our sake has been inevitably refined. Kashiwazaki’s nature, humanity, and culture are all brewed in the barrels of sake produced here. In the 200 yeas since the city’s creation, they have slowly been improving the flavor of our sake, and they have never stopped brewing this sake that people have loved for a long time.

The event that we can’t forget when introducing Hara Shuzo is the Chuetsu Offshore Earthquake that occurred on July 16, 2007. As a result of the earthquake, major damage occurred leaving over 70% of the company’s buildings collapsed. Five cellars were completely destroyed—the walls fell off, the pillars broke, the tiled roof caved in, and around 200 of the 300 sake tanks were buried under the roof. The very next day, the removal of 10,000 bottles of sake started, and the liquor storage tank was rescued from the debris. In the middle of August, the bottling line was started up again, in September the first bottles of sake were ready, and in October they were shipped out. The outcome of the earthquake was not pretty, but everything was able to return back to normal two and a half months later.

In 1972, when Japan was normalizing its diplomatic relations with China, their sake “Koshi no Homare: Morohaku” whose quality was spoken highly of by the then Prime Minister, Kakuei Tanaka, was chosen as a toast of the memorial dinner party in Beijing. Koshi no Homare served as a representative of the national liquor of Japan.