Nambu Shuzojo is located in Ono city, Fukui. It is a castle town located in the Hokuriku region with more than 400-years of history. This town still holds a strong image of a castle town and it is well-known as “Little Kyoto.”

Hanagaki Super dry (Chokarakuchi) Junmai is Sake Meter Value (SMV) 12+. The higher number, the drier. This is not added brewing alcohol, It is made by complete fermentation method of brewing. If you are super dry fan, you should try it.

Founded in Aichi Japan, Kunpeki Sake Brewery has a history of more than 100 years in sake brewing. It is located in Konan city. In this city, there are 3 sake breweries. They use the Kiso river’s underground flow water for brewing sake.

Their sake is conscientiously prepared and brewed in small batch. Every step of sake making is accomplished by united efforts of the whole family. The yeasts are carefully screened and selected, only the ones that are approved by their master brewer are used for brewing in their brewery.

In Konan, every year from the mid April to early May at the Mandaraji Park, Konan Wisteria Festival is held. Japanese wisteria mesmerize people by its mysterious beauty and fragrance. The wisteria pergolas set up in the park have around 60 wisterias from twelve species ranging from early to late bloomers, and visitors get to enjoy a variety of forms of wisterias, from brightly colored wisterias in purple, crimson, white and so on, and from long, elegant flower clusters to short, pretty wisterias. 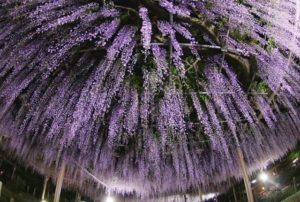 If you are to come Japan from mid April to early May, why don’t you enjoy tunnels of wisteria in full bloom while drinking sake? 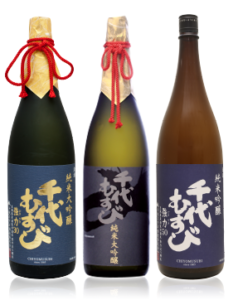 “CHIYOMUSUBI” means eternal ties with people. It also represents love between husband and wife, among parents and their children, brothers and sisters, and friendship among friends and neighbors. It is also a word for celebration. “Creation of happiness” is our management philosophy, which for customers and other people involved with Chiyomusubi. We consider deliciousness in the first place when we make sake. Rich taste, gentle aroma and smoothness are our bases of deliciousness.
Surrounded by great environment of our regional area in Tottori prefecture, by making fermented drinks like sake and shochu with safe and genuine ingredients, we want to contribute to happiness of people all over the world.

If you come up to Sakaiminato, Tottori, you can do Brewery tour. You can see inside of the factory and craftsmen making sake when brewery season. Advanced reservation by an e-mail or a fax is preferable.
E-mail : oroshibu@sea.chukai.ne.jp
Fax : +81-859-42-3515 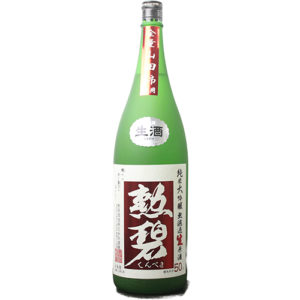 Founded in Aichi Japan, Kunpeki Sake Brewery has a history of more than 100 years in sake brewing.

Our sake is conscientiously prepared and brewed in small batch. Every step of sake making is accomplished by united efforts of the whole family.

The yeasts are carefully screened and selected, only the ones that are approved by our master brewer are used for brewing in our brewery.

The water of brewing is pumped up from 100-meter deep underground where the clear and cold natural water flows from Kisogawa River.

Deep flavor and gentle aroma are the features of our sake products.

Come visit us and enjoy a tour of the historic sake brewery and sake tasting !
We look forward to seeing you.