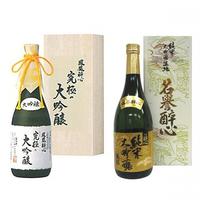 Suishin Yamane Honten Brewery was established in 1860. In the mid-Meiji period (1868-1912) the company unified its some 20 sake brands into one, with the aim of making them more widely known. Although the newly unified brand was initially called “Yoigokoro,” it started to be called “Suishin” as the years passed (the same kanji, but pronounced differently).

Discovering the “Kyokai yeast No. 3” in 1913, the company had already been recognized as a sake manufacturer in prewar days. The Suishin brand has also been highly valued since early times, winning first place three times at the National Alcohol Beverages Competition, held in 1919, 1921 and 1924. It also received the honorary award at a competition.

Speaking of Suishin sake, the great Japanese artist Taikan Yokoyama must be mentioned.

In a famous episode early in the Showa period (1926-1989), Taikan Yokoyama, who loved Suishin sake, found a kindred spirit in the then president of the company, Kaoru Yamane and promised to relish Suishin sake to his dying day.

In the brewing process called shikomi, the Suishin brewery has emphasized the use of ultra-soft water drawn from beneath the foot of Mt. Takanosu, which lies in Fukutomi-cho (the central area of Hiroshima Prefecture). In an effort to ensure constantly high quality Suishin sake, the brewery spent as long as two years to find this water. Because the ultra-soft water has almost no mineral content, the Suishin sake brewed with the water gives not only a delicate, refreshing taste, but also a full, elegant sweetness and richness. A light flavor and well-rounded aroma are also attractive features. As the main ingredients of the Suishin sake, top-quality “Yamada Nishiki” rice grown in Hyogo Prefecture and rigorously selected Hiroshima-grown sake rice are used.

Always keeping in mind the brewing of sake that one never tires of drinking which the artist Taikan Yokoyama loved to drink throughout his life, the brewer has grown, and is determined to continue expanding into both domestic and overseas markets. 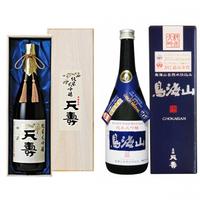 Founded in 1830, by Eikichi Ohi, Tenju SHUZO is a tightly knit, family-owned brewery enjoying its sixth generation ofsake production. TENJU brewery is located in Yashima village near the beautiful Mount Chokai, in Akita Prefecture, in northwestern Japan. The village has a population of only 5,000, but it is number one in sake production in Akita.

Severe winters bring heavy snowfalls, and prolonged low temperatures. These severe conditions are ideal for sake brewing. Tenju brewery avails itself of the nature that abounds in the nearby terrain. They use Mt. Chokai’s naturally-filtered, soft water. The resulting sake is distinguishably clean on the palate. The brewery’s philosophy is that sake making is rice making. The brewery commissions farmers from 25 rice paddies to exclusively supply rice for Tenju’s sake production. All of the employees of the brewery are intimately and intuitively familiar with rice because all of the workers are rice farmers during the summer and become sake makers during the winter months.

In 1983, Tenju Research Group was founded. This group is comprised of rice farmers who consistently endeavor to improve their crop from year to year. Tenju is the first brewery to establish such a research group. In Japanese “TENJU” means to last a hundred years. The name evokes both the wish for the longevity of Tenju Sake enthusiast, and the company’s 140 years over commitment to maintaining Japan’s timehonored, traditional sake brewing methods. With abundant resources Tenju is justifiably proud of its traditional brewing techniques and the quality of their handcrafted sake. JUNMAI DAIGINJO CHOKAISAN exemplifies the clean, well-rounded flavor and elegant nose for which TENJU is renown. 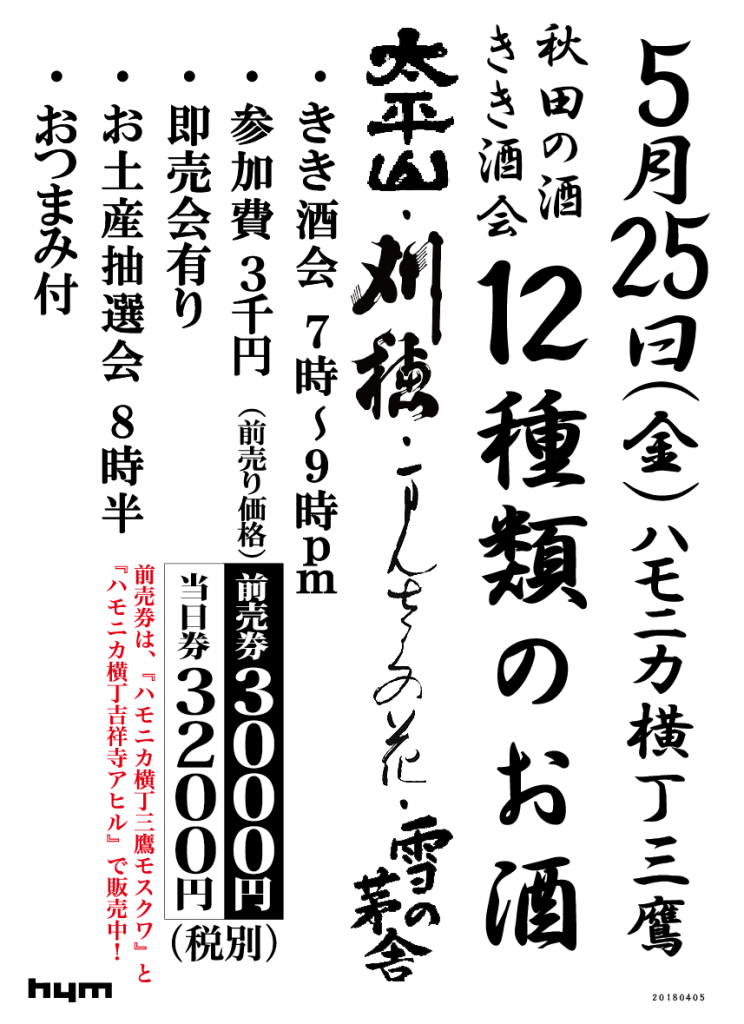 You can taste 12 kinds of Akita sake.